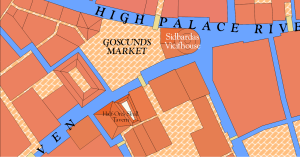 A tall, stocky man came up to where I sat.
“I’m Bryffeis Sumat.”  He looked at me with bemusement.  I stood and nodded shortly.
“Sorry to bother you, sir.  I’m Bayskon Spusha.  You know my father, Harthake Spusha, from Cantira.”  His face lit up.
“Yes, the furniture merchant.  Best furniture I bought, son.  What brings you to Aurice?” I was caught off guard with his sensible question.
“I’m here to see what opportunities I may find,” I said, surprised at my own answer. Mister Sumat nodded.
“How long are you staying?”
“About six days.”
“Do you need something to eat?”
“That would be splendid,” I said.   Mister Sumat sat down.
“How’s your father doing?”
“He’s doing very well, all things considered.  We don’t get as many orders from Aurice these days.”  Mister Sumat made a knowing expression.

“The Ibrevite Boatmen are taking a hefty cut these days,” he said with a wry grin. I sighed unintentionally. “You’d think they’d lower their prices to compete with dragonrail and what not.”  The young woman came to Mister Sumat’s side and muttered something with petulant eyes.  The tavernkeeper told her straightly to have someone ready a room in the attic.  I guess beggars can’t be choosers.  She agreed and vanished in the crowd.  Mister Sumat’s Auricese accent was not so strong and I could sense he had been to many other places in Goscundy and perhaps the world.
“Can you buy furniture, Bayskon?”
“I can,” I said a bit reluctantly, then realizing the circumstances, I ventured a bit more. “I can definitely tell you what’s a good deal and what’s not good,” I said with a gleam in my eyes.
“Kalafyat will take you in the morning to the furniture market.  If you do well enough, I’ll let you stay six days with a nice hot meal every day,” said the tavernkeeper with a friendly grin.
“That sounds like a bargain.”
“Good,” said Bryffeis Sumat with a deep rumble to his voice.  “I’ll fetch Kalafyat.”  I sat down and waited with a few calming breaths.  It was nice to have some sense of order and establishment and listened to the conversations with the relaxed interest of the mind. I noticed there was a young wizard sitting at a booth with two of his fellows and a woman.  You can tell wizards by their skullcaps which they are required to wear by law.  He was older than me, probably in his early or mid-twenties, but that makes him young by wizard standards.  He must have had a good sponsor or come from a rich family.   His cap was made of blue velvet and that was probably the least of his expenses if he had become a wizard.  Wizard’s and those who aspire to become wizards are hard-pressed to get loans from non-wizards.  Of course, they can get loans from other wizards, but I’m told the terms are very harsh.

I glanced again at the great orc’s skull and wondered how I would fare in a fight against such a beastman.  I startled a little bit when a man patted me on the back quite without warning.  I looked up and saw his grinning but somewhat stiff expression.  He sat beside me. His face was wide as were his shoulders.  He wasn’t so tall as Bryffeis Sumat.  His hair was dirty blond and came down to his shoulders.

“I’m Kalafyat,” he said with voice somewhere between a baritone and a tenor.
“I’m Bayskon Spusha from Cantira.”
“We’ll be going to Goscunds Market tomorrow morning for bed frames and chairs.”
“Is that the best place to go? Are you sure there isn’t a cheaper place?” I said.
“I agree,” said Kalafyat. “We can go to Northpointmouth Market after Goscunds.  It’s not as nice, but they have good quality.”
“I’m the outsider, so you know best.”
“Have you bought a lot of furniture?” said Kalafyat.
“I’ve sold a lot of furniture. It’s my family’s business.  We’ve sold a bit of secondhand furniture as well. I know what to look for.”
“We’re off to a good start,” he said.
“Who’s the skullcap over there?” I said, no longer restraining my curiosity. I nodded in the direction of the wizard and his companions.  Kalafyat didn’t bother to look in the direction.
“That’s Nouthern Pidveikh. He comes here sometimes when he visits with friends in this vicif.”
“He’s a commoner?”
“Yes.  His family is well connected. I could introduce you to him, but I don’t know him very well.”
“Of course,” I said.  We had a drink and then I was led to my lodging in the attic.  The sides of the room were flanked by the slopes of the rooftop, but there was plenty of room for my average height.  The bed had fresh linen and there was a wash basin on a side table.  Kalafyat told me he would wake me in the morning.   After he left, I counted the money in my pouch.  It was really foolish, I realized, to take the gondola.  I should have asked for directions and walked.  But with a hot meal each night, I would be able to squeeze by over the next six days with perhaps a bit left over.  I was a Goscundian and we have healthy appetites, so I had to have at least two meals a day with a snack thrown in.  With Kalafyat’s help, I would learn my way around and with a bit of luck, I could be introduced to Nouthern and maybe have a visit to the Magitechnic Institute.